On February 2nd, over 40 executives and leaders from the sports technology fields and professional sports teams came together at SportsCouncil SV’s first annual executive dinner to discuss the future of technology and how artificial intelligence could be better utilized to enhance the player’s performance metrics and fan experience. There was a great deal of insight from Robert Scoble and Shel Israel’s presentation of their new book The Fourth Transformation as well as from the panel discussion.

The first presentation was Robert Scoble and Shel Israel’s discussion on their new book, The Fourth Transformation: How Augmented Reality & Artificial Intelligence Will Change Everything. Published in 2016, Scoble who led the presentation spoke of the disruptive and rapid changes we see and adapt to through technological homeostasis as it impacts our daily lives, specifically virtual reality, augmented reality and the prominent rise of artificial intelligence. According to Robert Scoble, Apple is about to make a big push in the Mixed Reality space. "The future of television is Mixed Reality..Apple is going to release new products: A new iPhone, a new ipad, a new TV product, a new Siri, a new HQ, a new Apple watch..all based on making this mixed reality dream possible. One of the new iPhones will be a clearer iPhone that you look through with a PrimeSense 3D sensor. PrimeSense has 600 engineers in Israel right now working on this sensor".

While the authors proclaim we as a technological society are currently entering the fourth transformation, the previous three transformations, with the first occurring in the 1970s, when programming with computers became prominent. The second transformation introduced graphic user interfaces to users both with Microsoft’s Windows OS and Apple’s Macintosh system. The third transformation began in 2007 in which touch rather than keystrokes became the norm as a primary interface for mobile phones, tablets, and personal computing. Soon it will transcend technology to what we carry, what we wear and will alter our experiences in the real world, unavoidable in education, business, and our social lives. The book can be purchased here.

Following the book presentation, Robert Scoble returned to the front of the room as discussion moderator for how artificial intelligence and data analytics will change the game of sports from injury prevention to enhancing the fans experience. Joining Robert Scoble on the stage was Ian Wheat who leads strategic technology and innovation for the Sacramento Kings (NBA), Chase Phelps who leads sports performance at Stanford University, Juan Carlos Riviero, who is Vilynx CEO, and Stephen Smith, who is Kitman Labs CEO.

The conversation started with the impact and evolution of artificial intelligence and its use. Chase Phelps mentioned each team is independent and is considered silos of data. He has over 1000 athletes. Each of their schedules is crazy, student-athletes, juggling practice and academics. trying to aggregate all these different categories of data, medical, performance, especially when they are injured, bringing it all together can be a game changer, especially on a macro scale, pulling all the data points together, AI can be beneficial to assess all important.

Ian Wheat provided an interesting example stating they use it in their new arena, with the vision of enhancing the fan experience with everything. They have a special room within the stadium named “Mission Control” in which data is being assessed in real time, consolidating all decision makers together to analyze then enhance fan experience from food and beverage, ticket check-ins and player tracking through Zebra while in real time providing metrics and statistics to stakeholders at an accelerated level.

Juan Carlos Riviero mentioned how the recognition system and artificial intelligence, this involves visual recognition of identifying players, objects, and environments, being able to identify all of these things and then process data into something meaningful, depending on what it is being analyzed. The point is AI must be able to learn while continuing to provide valuable data on both player and audience, but also automate the process and save a tremendous amount of time. "It (AI) gives you the opportunity to analyse a ton of data..in a very easy way based on your preference and what you are looking for..FC Barcelona has a lot of people watching those videos of their competitors..so imagine if they can do all of that in the field in real time filtered in a way that they need to make real time decisions", said Mr Riviero.

Mr Riviero also believes that once AI and VR merges together, a new world will emerge. "When you combine voice information from devices like Google Home or siri and they talking and responding and can give you the time or the weather info in Palo Alto...once you combine this with VR, you will discover a new world..it is coming sooner rather than later", said Mr Riviero.

For companies who are starting to consider implementing AI, the system needs to be able to learn new concepts and fortunately it takes fewer images than before to process information. Quality control is also consistent and reliable so it does not skew false data when it comes to predictive analytics. For teams, what are the characteristics that you need to know, and define them clearly?

In terms of what is desirable for AI for the future. Humorously, the sports representatives stated win more games and discover more insights including better quality data on individual muscles and parts of the body. Currently, things like distance, acceleration/deceleration, and hydration can be measured as a whole, but independent fatigue or stress points of the body is necessary to really hone in on improving one’s performance edge.

In terms of downside to AI, it all depends on context. Sometimes a person can drown in too much data and the main importance before undergoing metric analysis is keeping in mind what you are looking to discover. Granted sometimes valuable insight can come by accident but for the analysts, clarity is imperative.

Another serious topic was the difficulty sharing data and weighing whether sharing methods or data can provide value, elevating the whole sport, however, there is always the concern of proprietary knowledge, especially when it comes to players. Medical information cannot be shared due to HIPAA and in the case of a player being traded, there are data points that cannot be shared or would be disadvantageous to the team.

However someone in the audience asked the panelists"How long they think it will take for an NFL coach to start using the biometric data of other teams to start cheating or try to use it against the other teams?". According to Stephen Smith, Kitman Labs CEO, "It is absolutely already happening..and I think they will also try to hack into that data".

Mr Phelps confirmed his opinion as he said that "Teams are employing analysts that do it for them but they also do it for other teams". This is important to notice as the NBA recently banned the use of wearables for contract negotiations.

Following the panel discussion, individual technology presentations were introduced to the audience from our sponsors Ixonos, Vilynx, and Kitman Labs. Each elaborating on how they are using their technology to improve upon player performance and enhanced audience experiences.

Join us at our next VIP Sports and Tech event at the StubHub Center in Carson, California on March 2, 2017. The theme for our next event is How Wearables, VR/AR, Sensors, Data Analytics, AI & Drones will Change the Game of Professional Sports. Teams already scheduled to join us at this event include the Los Angeles Galaxy, FC Dallas, Los Angeles Lakers and more. You can buy your ticket here. 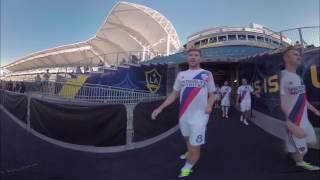